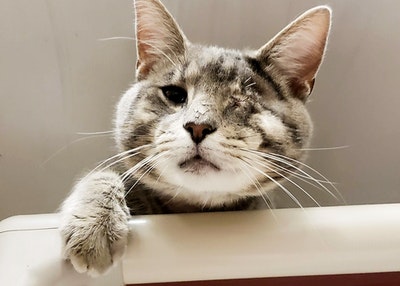 Community members called our Humane Officers after they had reportedly witnessed a cat heartlessly thrown from the window of a moving car near Tallmadge, Ohio, leaving the cat suffering from traumatic injuries and terribly frightened. As the witnesses looked after Beebop, as he would be later named, our Humane Officers responded to the scene. The Officers provided emergency first aid and quickly transported him to the shelter for complete emergency veterinary care he needed to survive.

Upon examination, our veterinarian determined that Beebop had suffered a severe injury to his left eye, leaving it swollen, red, and nonfunctional. Beebop had been partially blinded. Our team determined that the best course of treatment for Beebop would be the surgical removal of his damaged eye. Beebop recovered quickly from his surgery and other injuries he sustained at the hands of his abusers. Over time he has adjusted well to his limited vision.

Unfortunately, no identifiable information was able to be captured from the vehicle following the attack, ultimately preventing our Humane Officers from pursuing criminal charges against the offenders. Thankfully, Good Samaritan animal lovers are our eyes and ears in the community, helping to get these animals help urgently from our Humane Officers, veterinarian, and animal care staff. Each year, our Humane Officers respond to over 100 emergency situations, rescue these injured and sick animals, and transport them to our shelter for veterinary care and a second chance.

Once fully healed and available for adoption, Beebop stole the hearts of a new family in no time! Today, Beebop lives within the comforts of a safe home surrounded by the unconditional love of an adoptive family. 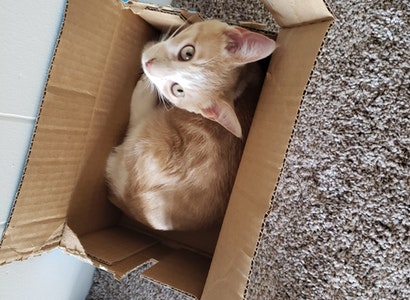