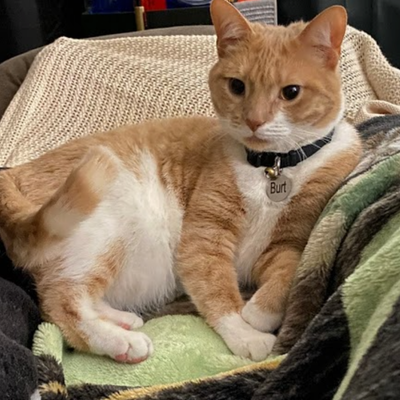 Burt was surrendered, along with a few other felines, when their health needs became overwhelming for his previous owner. While his housemates had intestinal parasites, ulcers, fleas, and more, Burt was lucky to only have fleas. Once rid of his flea infestation, his forever home was right around the corner!

Here's what his forever family had to say about him:

Something special stood out to me when I first saw Burt's photo on the adoption page. I made an appointment to visit him and see if he was a good match. He was certainly scared and shy when I visited, so I left him alone for a little bit. When I came back, he had somehow taken off the "Matthew is visiting me" sign and was playing with it. It felt like a sign. I began to rub his head through the cage, he lied on his back and looked me in the eyes. I instantly felt a connection, and without thinking said aloud, "Yes, I want him." Just like that, I brought Burt home. Burt was shy and kept to himself in my bedroom closet. But I always kept the door open for him to explore, especially at night when I was asleep. Soon, he transitioned to the whole apartment. Burt found new hiding places as he adjusted to all the space, but it wasn't long before he opened up and embraced his new life! Now many months later, Burt is such a different cat. He is so loving and always exploring the apartment. He is inquisitive and curious, giving everything a proper sniff. He likes to lie on my lap and fall asleep as I pet him. He is especially affectionate between 12am and 2am, when I really should be sleeping! Burt is my alarm clock, too; it's quite often I wake up to Burt staring right at me waiting for his tuna and milk breakfast. He very much likes to drink water, from a coffee mug, so he has his own mug that I always refill with fresh water. Burt is obsessed with the birdie-on-the-stick toy and gets very excited to grab it. Yet Burt also enjoys his rest. He has a bed, two cat hammocks, and two cat trees, and he'll sleep anywhere. It especially makes me happy when he sleeps on the couch knowing he is comfortable in his home. Burt too has responded well to being held. He's not into tummy rubs, but he loves back scratches and purrs quickly. Overall, Burt and I have a very close bond. He has made my life so much more fulfilling. I am so happy he is a part of my family. Every day I kiss him and hug him to let him know he is loved more than anything. 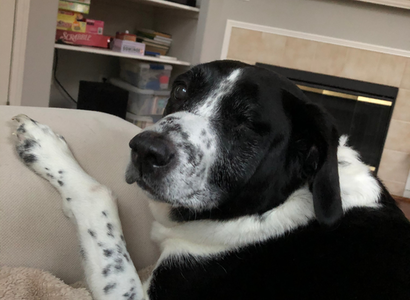