January 7 - Out with the Old, In with the New 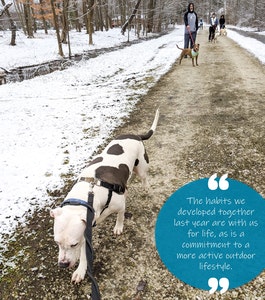 Thank you to everyone who followed and engaged with the Pound of Cure monthly blog posts and weekly (more or less) Facebook updates on the journey to better health Blue and I took throughout 2019. It was fun and exciting for both of us to share our adventures, whether it was on the scales at the shelter or at my doctor's office, on some of the most remote and rugged backcountry trails Summit County has to offer, and everywhere in between.

December 2 - Happy Holidays: A Time for Reflection and Renewal 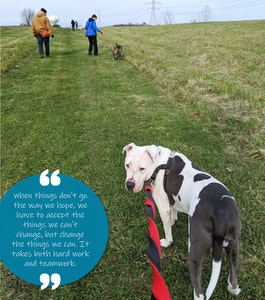 Well, as you can see, the last two months have been a challenge for our friend Blue. No getting around it, we've had some setbacks - interestingly at a time of year when most of us struggle with temptation and a few extra pounds. 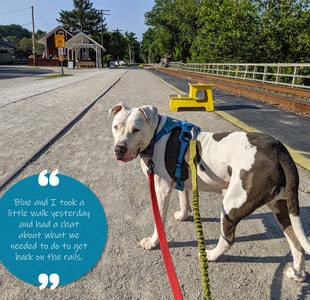 So, a setback. No way around it. October, beautiful as it was and always is around here, was a bump in the road.

For both of us.

Well, Blue and I took a little walk yesterday and had a chat about what we needed to do to get back on ... 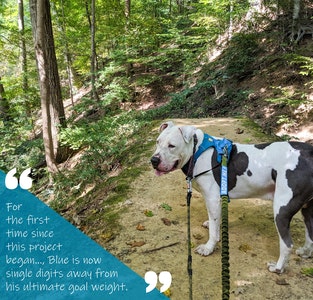 For the first time since this project began 10 months ago, Blue is now single digits away from his ultimate goal weight. After last month's setback, that's a big deal, as I think you would agree.

Again, because it just can't be said often enough, thanks to the staff ...

September 18 - Blue Goes to the City 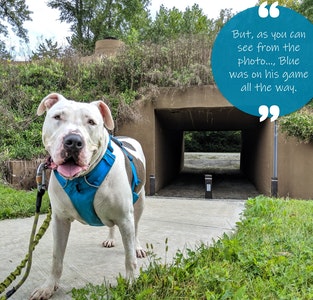 We mentioned in last week's Facebook update that Blue's hiking life would be in for a big change the next time he hit the Buckeye Trail (BT). Well, this past Sunday, for almost 6 miles, it did.

As a reminder, the BT loops around the entire state of Ohio for over 1,400 miles. In fact, it's the longest marked, continuous loop trail in the world. Some parts wind along wild and remote forest paths. Others follow roads, streets, and multi-use trails like the Towpath. Shifting gears from lightly-traveled, quiet paths to busy streets and trails shared ... 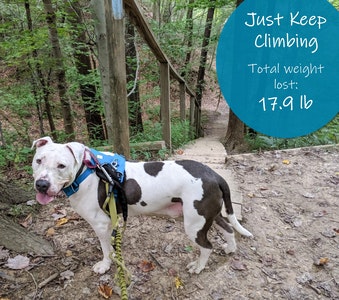 Anyone who's done their best to set and achieve a fitness or health-related goal knows the feeling. You stay focused, relentless, and diligent as you work as hard as you know how to cross the finish line. And yet, when it comes time to measure progress, despite all that effort, you realize you've hit a bit ... 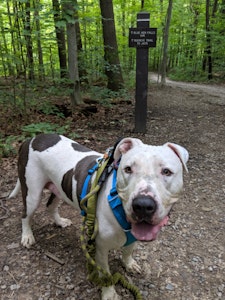 The kennel cough quarantine, expertly managed as it was, certainly turned Blue and my hiking plans inside out for a long time. But we're finally 99% back to normal.

I'll be out of town this weekend, but Blue and I will be back on the trails over the Labor Day holiday. Stop by Facebook on Tuesday, September 3, for the Grand Finale of our Northern Buckeye Trail section hike.

Before that, check back here and on Facebook on Wednesday, August 28, for a year-to-date fundraising recap, Blue's August weigh-in, and tips on safe and fun hiking with ... 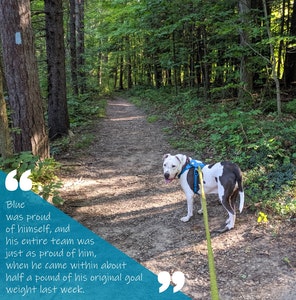 Dr. Melisa Kauffman, the Shelter Veterinarian for the Humane Society of Summit County, took a look at our boy Blue last week after he clocked in at 85.6 pounds. As she put it, "Blue is looking great and his overall health has improved greatly. Twenty pounds ago, 85 ... 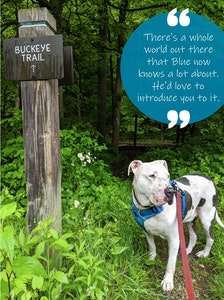 About a month ago, life at the Humane Society of Summit County was temporarily interrupted by an outbreak of canine infectious tracheobronchitis, commonly known as kennel cough. Under the expert guidance of Dr. Melisa Kauffmann, the shelter's veterinarian, the employees followed rigorous feeding, sanitation, quarantine, and other infection control protocols. This, combined with the staff's unlimited patience and dedication, kept the situation under control.

Earlier today, the first step in returning to normal was announced. As of tomorrow, Blue and his friends will be able to leave the shelter for their beloved field trips.

Those of you who have been following the Pound of Cure find-a-forever-home-for-Blue/fundraiser program have probably been wondering what Blue and I have been up to lately. The answer is, suspending our hikes while Blue and his pals got through the outbreak of highly contagious upper respiratory disease (commonly known as "kennel cough") that hit the shelter a few weeks ago.

This was a serious health emergency for all the dogs, even those that were seemingly disease-free. It required the staff to quarantine the sick animals, close the canine side of shelter to the public (including volunteers), and work meticulously ... 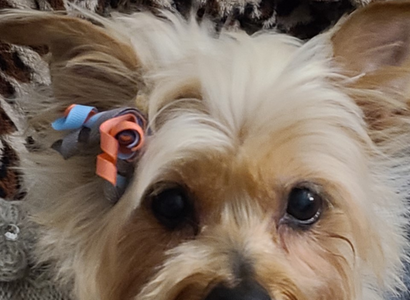